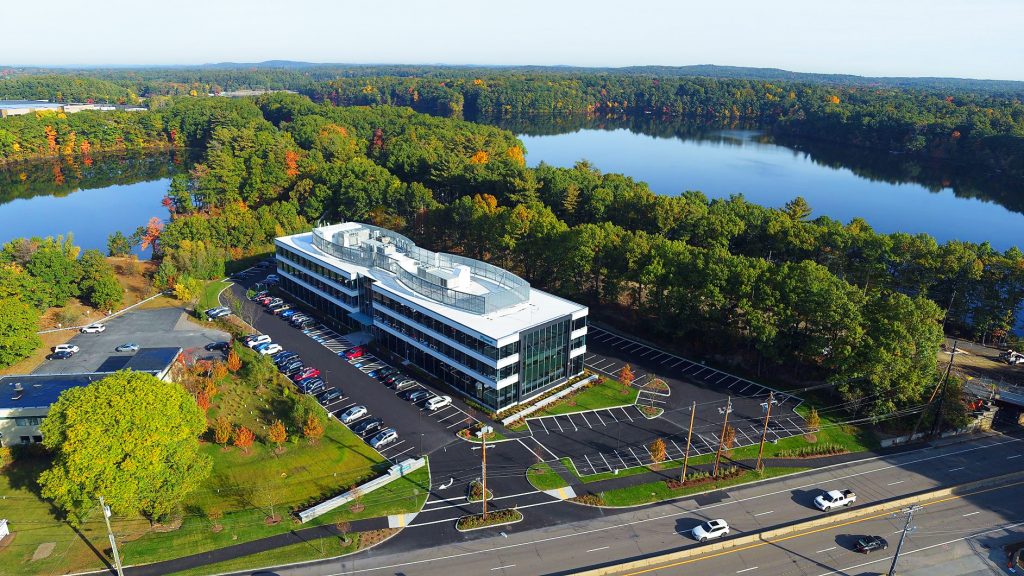 The Menlo Park, California, company has opened a larger facility in Natick. Work there could impact many products society relies on now, and may need in the future.

NATICK – A Silicon Valley company that offers testing and compliance services for a variety of products ingrained in modern culture – like cellphones, batteries and even self-driving cars – has unveiled a new and bigger office in Natick.

Menlo Park, California-based Exponent Inc., which had an office on Strathmore Road for 20 years, officially opened its new $25 million building Thursday at 1075 Worcester St. (Rte. 9), where the former Toolmex once stood.

The new location has a bigger footprint – 60,000 square feet that Exponent President and Chief Executive Officer Dr. Catherine Corrigan called a “flagship facility.” There are labs on the first floor and office space on the upper two. It currently houses 85 employees, with a goal to eventually reach 200.

Exponent paid Natick about $57,000 as a condition for getting local permits to start construction, according to Natick Planning Board member Terri Evans. The payment went into the town’s open space fund, and was requested by the board, because the building was bigger than what local zoning laws allow.

The company’s financial bread and butter are contracts with companies whose products malfunction, causing accidents, fires and explosions. Work is done to determine why the accidents happened, and what can be done to prevent them in the future.

When Corrigan was asked to name an area of research to take place in Natick that she’s most excited about, her answer was “battery safety.”

To explain, she said safety is critical in devices like mobile phones, computer tablets, and electric and autonomous cars.

“There are many safety issues to consider,” Corrigan said. “All energy needs to be stored, and as more power goes into a smaller volume, safety becomes more critical.”

Tim Myers, Exponent’s principal engineer, led a tour of the labs, and the first door he opened showed equipment for taking batteries apart in order to find flaws. Next up were rooms in which vapors are studied to prevent fires in products like lithium batteries, water heaters and toaster ovens.

In the “dust testing lab,” Myers said work could help stop explosions in manufacturing plants that produce non-dairy coffee creamer, because the process produces dust that could combust.

Down the hall, Managing Scientist Hernan Sanchez was doing something that some might find counter-intuitive. Instead of opening up a damaged battery to see what went wrong, Sanchez studied its image on a computed tomography scanner. The process allows diagnosis without initial surgery, so to speak.

Myers mentioned Exponent has worked with the U.S. Army Natick Solider Systems Center to develop high-tech uniforms for troops. The company shelved its technology development team that Myers said created innovative products on the battlefield. One was a fishing-rod like contraption that lowers a tiny camera down a well to detect an improvised explosive device. It was used by U.S. troops in Afghanistan, according to Myers.

The tour ended at the “Materials and Corrosives Lab,” where products like hip implants and stents are studied to measure how they corrode in people’s bodies.

Components in self-driving cars are another area of experimentation in Natick that is near the top of Corrigan’s list, especially when it comes to safety, performance and reliability. One challenge is constant software updates in the components, Corrigan said. Another is human expectations.

With 20 offices in the U.S., three in Asia, three more in the United Kingdom, and one each in Dusseldorf, Germany and Basel, Switzerland, Corrigan said she looks for 8-12 percent annual growth in any given year.

“I think we’ll have faster growth than the company as a whole at this (Natick) facility,” she said.