The coworking office space model continues to grow at a substantial pace: from 27M SF of shared office space in the U.S. in Q4 2017 to 44M SF in Q4 2018. Many traditional landlords are viewing coworking companies, like WeWork, as direct competitors for smaller tenants. Companies like WeWork can often be the more attractive option due to more flexible leasing options, flexible spaces, and a much more recognizable brand name among industry outsiders. In order to better compete for tenants that are seeking these flexible options, some landlords are beginning to roll out their own coworking-type programs. 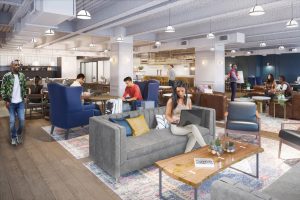 Brandywine has taken a different approach and introduced a new service called BEX as an amenity provided to all tenants that have a traditional lease with them. BEX allows tenants access to on demand desk and meeting spaces away from their leased space. This was originally introduced as a way to differentiate and compete with other traditional landlords, but is now being looked at as a way to compete with coworking companies. Tenants can have both the convenience of their own space, built out to their specification, and the flexibility to grow their company on an “as needed” basis. 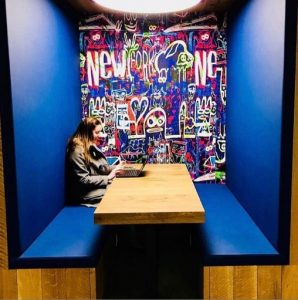 Boston Properties has unveiled its new co-working product called Flex. The first Flex concept in the Prudential Tower was fully leased within a month of opening. Boston Properties recognized that small to mid-range companies were not adequately being supported by the options available in the market place and sought to bridge the gap. Once companies start to grow, they often feel compelled to begin establishing their own specific company culture, but coworking spaces do not provide tenants enough control and autonomy to achieve this in the early stages. However, these companies might still be growing too quickly to be comfortable signing a long-term traditional office lease. This is where Flex comes in. Flex offices consist of glass workspaces around shared facilities such as kitchen and conference rooms and have 1 month to 3 years lease terms. In contrast to most coworking models, Boston Properties refrains from running events or taking control of the office culture in any way, allowing the tenants to establish and define these things for themselves. Some tenants have also used this space to house them while their longer-term space was being built out. Another advantage of this model is that the lease documents shrank from around 100 to 4 pages because of the lack of liability clauses, sublease provisions, insurance clauses and more, which allows the tenant to avoid hiring a real estate lawyer. The second Boston Properties Flex property recently opened at 100 Federal Street Boston.

Ryan Simonetti, Chief Executive of Convene, a flexible event and workspace provider backed by Brookfield Asset Management, predicts these newly conceptualized leases will continue: “Landlords have to respond to what customers want. This isn’t a fad.”

As downtown owners begin to innovate to compete with coworking, the discussion turns to suburban owners and how they will develop creative solutions for the flexible needs of today’s growing companies.